Self-driving cars are coming to New York City, but don’t expect to see them tootling along Fifth Avenue just yet.

Optimus Ride, an autonomous-car startup based in Boston, is bringing its technology to the Brooklyn Navy Yard, a 300-acre industrial park with more than 400 manufacturing businesses and 9,000 people working on site.

Situated just across the East River from Manhattan, the Yard will host an unspecified number of Optimus Ride’s diminutive driverless cars, ferrying workers around the site within defined, geofenced areas. The company’s self-driving vehicle is kitted out with an array of sensors and cameras to survey the road ahead and help it find its way, and can reach speeds of up to 25 mph.

Optimus Ride says it’s the first self-driving vehicle program to launch in New York state. Officials gave the nod to trials on public roads in 2017, prompting Audi and GM Cruise to apply for a permit, but strict safety stipulations appear to have so far deterred both companies from embarking on testing in the state.

Optimus Ride’s efforts are similar to those in other parts of the country where autonomous vehicles are being deployed on private roads along fixed routes inside specific spaces such as university campuses or gated retirement communities. 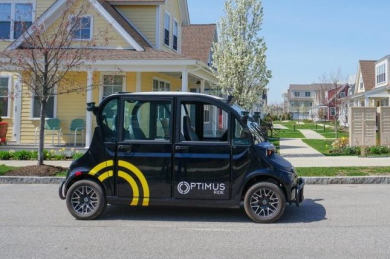