The vehicle requires 80 per cent less energy than an equivalently-sized diesel bus, and will be tested at Nanyang Technological University, Singapore.

The single-deck Volvo 7900 Electric bus is 12m long and has a capacity of 85 passengers.

This is a key milestone in NTU and Volvo’s development programme – under the university’s partnership with the Land Transport Authority (LTA) – to develop and conduct autonomous vehicle bus trials for fixed route and scheduled services.

The Volvo 7900 Electric bus is equipped with numerous sensors and navigation controls managed by a comprehensive artificial intelligence (AI) system. Ensuring safety and reliability, the AI system is protected with cyber-security measures to prevent cyber intrusions.

The Volvo bus is the first of two that has undergone preliminary rounds of rigorous testing at the Centre of Excellence for Testing and Research of Autonomous vehicles at NTU (CETRAN), where various elements of Singapore’s urban road condition, such as traffic signals, multiple bus stops and pedestrian crossings, and tropical conditions such as driving through heavy rain and partially flooded roads, are replicated.

Plans are in place to test the bus at NTU and subsequently extend the route beyond the NTU campus. 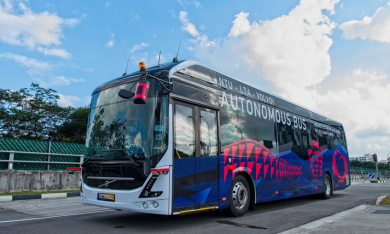