Toyota Hits the Water With an Investment in Robo-Ships

Like any properly terrifying invasion, it’s hard to tell whether the robot one will come by land, air, or sea.

Toyota has put its bets on the first two already: It has built its own autonomous driving tech, obviously, and Toyota AI Ventures has put money into robo-shuttle developer May Mobility, lidar maker Blackmore, and flying car effort Joby Aviation. And now, the venture arm is casting an eye to the water, participating in a $10 million Series A investment in Sea Machines Robotics.

Boston-based Sea Machines is led by Michael Johnson, a lifelong marine engineer who helped prepare for the recovery of the capsized Costa Concordia. While on the project, he could look at the wrecked cruise ship from his apartment on Italy’s Isola del Giglio, and see an opportunity to do things better. Because human error causes the vast majority of collisions on the water, just as it does on the road. The cost of human labor is a pain point, just as it is with cars. “With modern technology, we could be doing it differently,” he says.

So in 2013, Johnson founded Sea Machines and started developing a range of systems that could make life on the water safer and more efficient. “This is a new technology for an industry that’s been operating the same way for a long time,” he says. 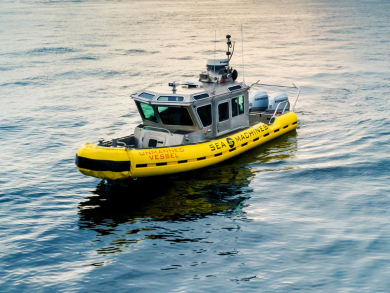