There's a rush to transform vehicle interiors for an autonomous era, but safety constraints make turning concepts into reality an arduous task

For as long as the possibility of self-driving cars has filled the imagination, there have been parallel dreams of what people might do inside their vehicles once freed from the monotony of driving.

When the idea of vehicles that drove themselves took hold in the 1950s — with electric infrastructure embedded in highways as a guiding principle — one particular sketch came to encapsulate notions of how passengers would spend their time: A family sits contentedly around a small table, playing a game of dominoes. If not for the steering wheel behind Dad's left arm, it'd be easy to mistake the setting for this wholesome family activity for a living room instead of a vehicle hurtling down a highway.

As the widespread deployment of autonomous vehicles becomes a more plausible, and perhaps even inevitable, development, automakers and their tech-minded counterparts have doubled down on interior concepts like the one envisioned six decades ago.

But for all the excitement, these ideas are further away than most people think because they are simply too dangerous for passengers. Accidents that seem minor today take on a whole new level of danger once the passengers move out of a traditional forward-facing belted-in position.

"Some visions of the future give me the chills," said Steven Peterson, vice president of engineering at ZF. "Restraints need to change completely. Small changes to the interior can have a dramatic impact on safety." 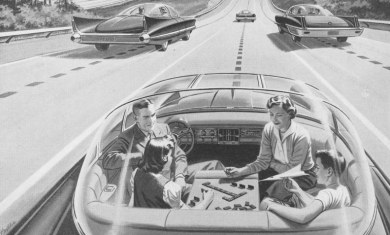