This Driverless Startup Has One Mission: Save the Future of Ford

Argo AI’s Bryan Salesky, with a billion-dollar investment from a Detroit icon, might be looking for another automaker to buy in.

Bryan Salesky has been entrusted with $1 billion by Ford Motor Co. and given a mission to bring the pioneering American automaker into the age of driving robots. All that money to figure out tomorrow from a company feeling more than a little insecure about its present comes with an unavoidable psychic weight. It becomes top of mind when Salesky looks down at the floor.

“It’s not like I lined the place with marble,” Salesky says as he walks through Argo AI’s Ford-funded offices, spread across two floors of a new building in a hip section of Pittsburgh. “I don’t want everybody to think that we’re so well-funded that we can pour money on things ridiculously. So we’ve got polished concrete floors instead of beautiful tile like a law firm. This is not a law firm.”

The investment in Argo AI, a self-driving startup, is Ford’s way of trying to catch up to Alphabet Inc.’s Waymo and General Motors Co. in the driverless derby. Ford took a majority stake in Argo last year and expects to deploy autonomous vehicles running its system in a money-making business by 2021. But this move to make up for lost time in next-generation technology comes as Ford is beset by  plunging profits, investors stampeding out of a stock that has fallen 24 percent this year, and a credit rating that’s now  one step above junk. Wall Street is openly questioning the leadership of Chief Executive Officer Jim Hackett, after only 16 months on the job, and predicting the dividend  will be cut. 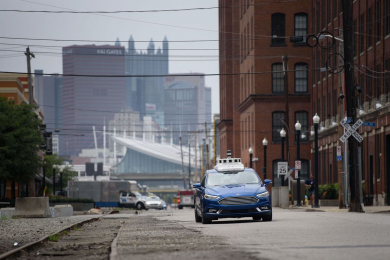