Lyft and Aptiv have completed 5,000 paid trips in their self-driving taxis

Lyft and self-driving technology company Aptiv have been operating a small fleet of self-driving cars in Las Vegas since the Consumer Electronics Show last January. And today, the companies say they’ve reached a new milestone in their partnership: 5,000 paid rides.

Lyft and Aptiv claim to be operating the only commercial robot taxi service in the US, and perhaps the world. And while there are a number of ride-hailing pilots taking place around the country — Waymo in Phoenix, Cruise in San Francisco, Voyage in Florida — none are yet charging customers to ride in their self-driving cars. Waymo is expected to launch a commercial ride-hailing product in Arizona later this year.

Lyft and Aptiv’s fleet in Las Vegas is modestly sized, just 20 vehicles servicing around the same number of popular destinations along the Las Vegas Strip. They are part of a larger fleet of 75 vehicles that is kept in the city by Aptiv, an offshoot of global auto parts supplier Delphi. The companies hope to add 10 cars to the operation in the coming weeks, as well as new destinations in downtown Las Vegas.

“We really want this to be something accessible to all Lyft passengers in Las Vegas,” Jody Kelman, product lead for the company’s self-driving platform, told The Verge. “Everyone from your grandma to the bachelorette party.” 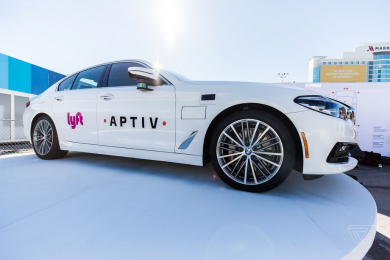