There’s an extra bus cruising through the heart of Times Square this morning – but there’s no one behind the wheel of this vehicle. It doesn’t even have a wheel.

Coast Autonomous, a new entry in the crowded self-driving vehicle market, kicked off a day of demonstrations on Broadway in New York’s crowded Times Square, a symbolic location meant to demonstrate the company’s confidence in its technology. While Coast is only a year old, it has been working on the tech for 15 years, Chief Technology Officer Pierre Lefèvre told Digital Trends.

Indeed, Coast’s tech is behind Navya, the company whose self-driving buses power Keolis vans that have been shuttling folks up and down the Las Vegas strip. And occasionally having minor fender-benders.

Coast’s first vehicle, called the P-1 Shuttle, is a bi-directional van that looks normal from the outside. Inside, it’s basically a bathtub on wheels, with no seats for a driver or passengers and no space for a driver at all. Instead, the interior is just a ring of seats at the windows that circles the cabin, and a space for a door. One wall has a built-in screen for displaying information to passengers; during our demo, it showed diagnostics from onboard computers and lines of code on the status of CAN network components and onboard elements such as oMotorTorque and oParkingBrake. One imagines ride info and ads being posted up there in the future, of course.

Lefèvre said the van’s wheelbase was shorter than Navya’s offering, yet had more room for passengers. It appeared able to hold 10 to 12 passengers comfortably, as long as some riders skipped the seats and stood in the main cabin. With fewer seats, the company claims it can hold up to 20. 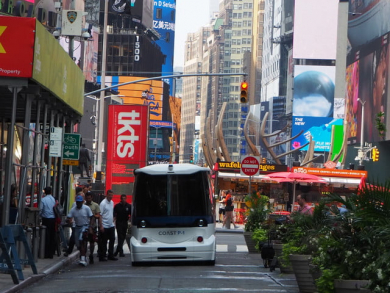