It's a slow-driving pod, but that should be good enough for corporate campuses

A self-driving vehicle can avoid a lot of problems by just going slowly. A slow bot hurts a lot less when it hits you, and cheap sensors are good enough when you don’t have to see far to avoid a collision.

And cheap is more than a feature, it’s a strategy. Make a costly product cheaply, and it’s not the same product—just look to the supercomputer in your pocket that calls itself a phone.

That’s the idea behind Perceptin, a little startup founded in 2016 by Shaoshan Liu, who got a Ph.D. from the University of California at Irvine and then worked for a decade at the U.S. branch of Baidu. Liu asked himself just how much robocar he could build on a shoestring, and made the task easier by specifying a top speed of 20 kilometers per hour (12 mph).

“Our manufacturer in China can make these EV cars for under US $5,000, says Liu. Throw in the software and other necessities, he adds, and the total manufacturing cost should stay below $10,000.

And what do you do with slow bots that can’t manage street traffic, let alone highway speeds? You fence them within the sheltered parks of university and industrial campuses, where nobody minds if you brake for squirrels. It’s a narrow market niche, but big enough for a startup.

“Look through China and there’s thousands of campuses, for universities and companies—probably a million-unit market,” Liu says. 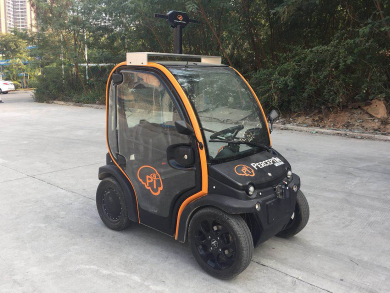