Mountain View–based startup Drive.ai isn’t taking its robo-cars to the land of the Grand Canyon, but to the wilds of the Lone Star State.

In the evolving geographic distribution of self-driving cars, the go-to getaway is Arizona, where good weather and minimal government interference make testing two-ton robots something like fun in the sun. But as with all such places, the more crowded it gets, the less people want to go there any more. Maybe that’s why Mountain View–based startup Drive.ai isn’t taking its robo-cars to the land of the Grand Canyon, but to the wilds of the Lone Star State.

Starting in July, the company will run a fleet of driverless vehicles around Frisco, Texas, a city of 164,000 people on the northern edge of the Dallas-Fort Worth metro area. Announced today, the six-month pilot—which will keep human safety operators behind the wheel, ready to grab control if the car gets confused or misbehaves—marks Drive.ai’s first large-scale effort to put people in its cars, and the first such deployment in Texas. Waymo has done some testing in Austin, but this service will provide regular rides to the public.

The Drive.ai setup will look like more like an airport shuttle than a taxi service. The company’s easily recognizable orange and blue Nissan NV200 vans will run only in a tightly geofenced area, along fixed routes.

Drive.ai hasn’t divulged much in the way of details, but says one such route will serve employees at an office park in the southern bit of the city, taking them between buildings and to a nearby stadium and apartment complex, at no charge. It will use fixed pickup and drop-off locations, so the cars don’t have to worry about finding a safe space to pull over. 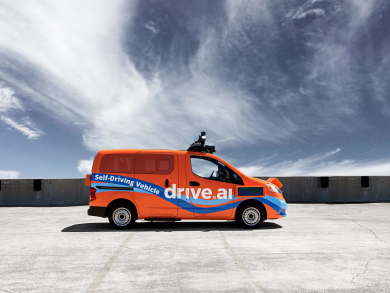