Look, Ma, no driver: Gearing up for NTU driverless shuttle

In a few months' time, going to lunch or rushing to class could mean hopping on a driverless shuttle bus for Nanyang Technological University (NTU) students.

The vehicle, which can travel at speeds of up to 40kmh, is able to take 24 people at a time on a 500m route connecting student halls with the main academic areas.

Ferrying up to 300 passengers a day, it will encounter obstacles such as pedestrians and traffic, all vital input for the machine to learn how to get around in the real world.

Yesterday, the university signed a deal with Dutch firm 2getthere and SMRT Services - the transport operator's operations and maintenance arm - to introduce the buses to NTU's campus.

In April 2016, SMRT formed a joint venture with 2getthere to bring driverless vehicle systems to Singapore and the region, acquiring a 20 per cent stake - worth $6 million - in the Dutch company later that same year.

Since November last year, the bus has been on test runs along a 350m route between two student halls on the NTU campus, safely carrying about 4,000 passengers in total.

There are big plans ahead for it to eventually traverse the entire campus and beyond - connecting NTU to neighbouring CleanTech Park.

To help it "see" its way around, the bus is equipped with cameras as well as lidar (light detection and ranging) and ultrasound sensors. Small magnets embedded in the road act as navigation guides. 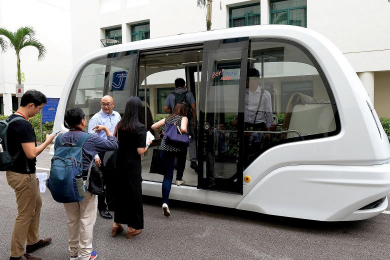