Woowa Brothers, which operates a mobile app for food-delivery services, has developed a self-driving delivery robot.

The robot will start dropping off meals indoors on a trial basis as early as May, with the service gradually expanding to outside deliveries.

"Dilly," coined from the words "delicious" and "delivery" was developed jointly with Korea University professor Chung Woo-jin. It looks like a vacuum cleaner at 70 to 80 cm tall and rounded with three compartments, scurrying about on little wheels once the destination has been punched in.

It is equipped with software that helps it determine its location and detect obstacles. It can travel at the same speed as a human walking or about 4 km/h.

The robot will undergo a three-stage test before the actual run, with the first trial service starting in a food court in May where Dilly will serve meals and collect trays. It will then start working on university campuses and in apartment complexes in the second half of this year.

Ryu Jin at Woowa Brothers said, "We will continue fixing problems detected in the trial runs with the goal of having the robot actually deliver food within two or three years." But actual deployment could take longer.

Woowa Brothers developed the robot to assist human delivery staff but plans to expand its uses to delivering shopping and newspapers. 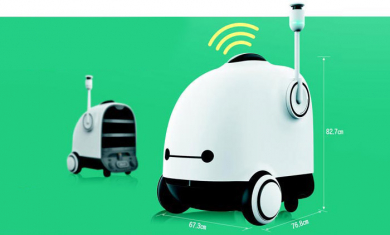