China issued on Thursday the first batch of licenses for road tests of driverless vehicles to NIO, a Chinese electric vehicle startup, and the state-owned auto maker SAIC Motor.

Based in Shanghai, NIO is a smart automobile maker backed by Baidu, Tencent, and Xiaomi. SAIC Motor, a partner of Alibaba and manufacturing partner of GM, has obtained permits for one of its smart car models—the MG iGS.

“We are honored to have received the permit from the Shanghai Municipal Government,” said Lihong Qin, NIO co-founder and president, in the company’s statement. “Their decision to grant us this permit shows their faith in NIO’s autonomous driving R&D technology and testing. We will now be able to further the development of our autonomous driving technologies,” he said.

Baidu’s founder Robin Li tested the firm’s autonomous cars (in Chinese) last July in public roads in Beijing, which then stirred controversy as the firm violated regulations for road testing an autonomous car without obtaining a permit. Shanghai government’s move reflects not only the needs from Chinese automakers but the authorities positive attitude toward the technology. 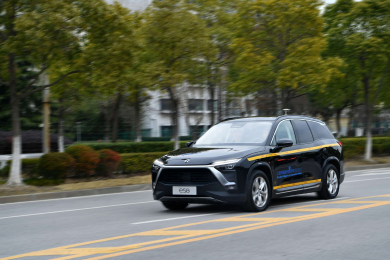