Watch a Self-Driving Car Navigate the Streets of Moscow

Yandex appears to be making progress with its autonomous cars.

Self-driving cars aren't just for Silicon Valley. Russian tech company Yandex is testing them on the streets of Moscow, as the first step toward launching an autonomous ride-sharing service.

When we last checked in with Yandex, the company was testing its Toyota Prius V development mules on a closed course. But now the cars are running on public streets in Moscow. Yandex said the vehicles have been roaming the streets of the Russian capital in December, experiencing chaotic traffic and freezing temperatures.

Now that self-driving cars are proving themselves in ideal conditions, companies are moving on to less-than-ideal conditions. In the United States, Ford and Waymo have used Michigan's brutal winters to see if autonomous cars can handle the cold. Winter weather presents the same challenges for autonomous systems as it does for human drivers, such as slippery roads and limited visibility.

Yandex isn't just another startup looking to get in on the autonomous-car game. Last year, it took over Uber's ride-sharing operations in Russia. It also has a digital-mapping arm that could provide valuable data for self-driving cars. 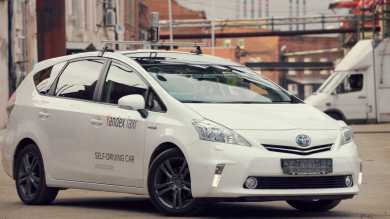