Embark’s autonomous trucking solution just demonstrated what it could be capable of in a big way: It make a coast-to-coast trip from L.A. to Jacksonville, Florida, driving 2,400 miles from one end of the U.S. to the other.

This follows Embark‘s prior test route, which ran from L.A. to El Paso, and covers more than four times the distance of that initial path. Embark did the new cross-country trip in five days, but it included a safety driver on board behind the wheel, and because said driver has to be ready to take over control, the route involved scheduled rest brakes. Once Embark’s tech is ready and cleared to run on its own, Embark expects the trip to take only two days in total.

Embark’s goal isn’t t replace the driver entirely, however: It just wants to make it possible for long-haul trips to be managed by fewer drivers, eliminating the need for team driving, for instance, and helping to address a lack of available qualified human drivers for this kind of shipping. Drivers are still expected to help with the parts of the route that don’t involve freeway and driving, but still the efficiency gains and trip time benefits would be huge once their technology is in service.

This demonstration also helps Embark prove out some of the aspects of its business that depart from what its competitors are doing. The startup doesn’t use high-resolution, detailed maps of its route to inform its autonomous system, for instance; instead, it relies entirely on sensor data and its onboard machine learning. This cuts down on cost and time needed in terms of preparation before establishing new routes, and Embark says its new 2,400 mile trip down the I-10 shows it can handle major thoroughfares without issue.

Embark’s truck has just arrive back on the West Coast, and the team is still pulling all the data regarding disengagements and human intervention, but according to subjective reports from the drivers on board “the vast majority of the driving was autonomous,” with “hours at a time with no disengagements, and when they did occur they were usually only a few seconds” long, per Rodrigues. 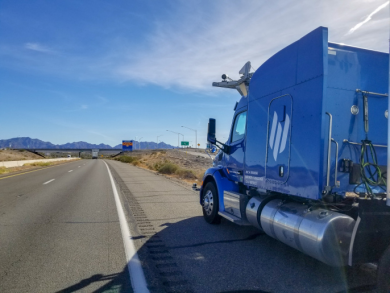