“True autonomy for every single use case, is some ways away,” Khosrowshahi began, acknowledging that the problem is a massive one to solve. But, he suggested that the first Uber autonomous vehicles to be deployed commercially would be on streets relatively soon.

“We will have autonomous cars on the road, I believe within the next 18 months,” he said. “And not as a test case, as a real [use] case out there.”

Uber has put its autonomous vehicles on roads in a testing capacity in a number of different pilot projects, including most recently in Arizona. Khosrowshahi described how this will lead to a “feathering in” of autonomous vehicles in their ride-hailing mix, with the aim of eventually giving over a greater portion of rides to AVs.

The Uber CEO described how in, for example, Phoenix, there will be 95% of cases where the company may not have everything mapped perfectly, or the weather might not be perfect, or there could be other factors that will mean Uber will opt to send a driver. “But in 5 percent of cases, we’ll send an autonomous car,” Khosrowshahi said, when everything’s just right, and still the user will be able to choose whether they get an AV or a regular car.

That initial 5 percent is going to grow to 10, to 15 and 20 as Uber’s algorithms learn more about what it takes to drive in a real-world situation, he said, and then “in five years, we will have the perfect driver in Phoenix.”

Khosrowshahi added that Uber will then have to retrain its computer driver in every city, and that he then expects within 10 to 15 years to be able to serve most cities competently with autonomous tech. Asked whether a child born today would even have to learn how to drive, Khosrowshahi confidently said he didn’t believe they would. 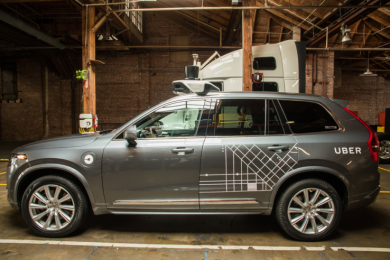