Automotive technology company Aptiv is teaming up with Lyft to offer rides in self-driving cars to CES 2018 attendees.

Riders will be able to use the Lyft app to hail one of Aptiv’s autonomous cars, and take them to any of more than 20 destinations around Las Vegas. It’s the latest small step toward what both Aptiv and Lyft believe is the future of transportation.

Autonomous rides will be available from January 9 to 12, departing from the Las Vegas Convention Center’s Gold Lot. Passengers will be walked through an exhibit extolling the virtues of self-driving cars before setting off (Aptiv and Lyft each have a product to sell, after all). Each car will have a safety driver in case something goes wrong, as well as an in-car host to explain the technology.

The CES demo is a byproduct of the current complex web of self-driving car partnerships. Prior to being purchased by Aptiv, Boston-based autonomous-driving startup NuTonomy had its own partnership with Lyft, and the two entities started an autonomous ridesharing pilot program in Boston late last year. Now NuTonomy owner Aptiv is stepping in to do things itself.

Autonomous-vehicle demonstrations are nothing new in Vegas. Automakers have brought self-driving cars to CES before, and a self-driving shuttle began operating in the city a few months ago. But the combination of autonomous driving and ridesharing is expected to have a bigger impact than either factor could have on its own. 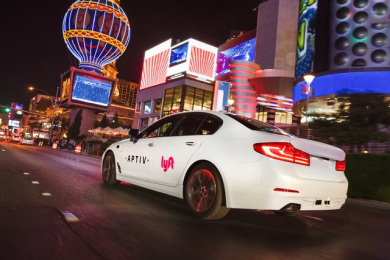