Autonomous vehicles won't arrive overnight, but almost every week they seem to inch a bit closer to becoming an everyday reality.

The latest example of that incremental progress occurred in Boston on Wednesday when Lyft announced that the ride-sharing company has begun a self-driving car pilot in the city's Seaport district. The program is a partnership with the autonomous vehicle startup NuTonomy, which has been testing their cars in Boston since January.

"Our partnership with Lyft has two goals," NuTonomy said in statement posted on their website."First, we want to let members of the public experience driverless vehicles firsthand, so they can better understand the impact this new technology will have on their lives. Second, based on feedback from pilot participants, NuTonomy's engineers will adapt and improve our system, so that we can deliver an autonomous transportation experience that is extremely safe, efficient, and comfortable."

Experts predict that driverless cars will advance neighborhood by neighborhood, city by city and state by state as competing car companies gather data, refine their robots and look to grab more territory using what they've already learned. The result is likely to be a patchwork of gradual change.

The NuTonomy vehicles, which are available through the Lyft app, include a human backup driver in case the vehicle runs into trouble, according to the Verge. The program marks an important step for Lyft as it competes with Uber, which has unveiled autonomous taxis in Phoenix and Pittsburgh. Those taxis include a human backup driver, but the company has unveiled an ambitious plan to put completely driverless Volvo Taxis on the road in 2019 - likely in the United States. Lyft, meanwhile, has partnered with at least five automakers, including Ford, GM, Waymo, Jaguar and Drive.AI, according to Recode. 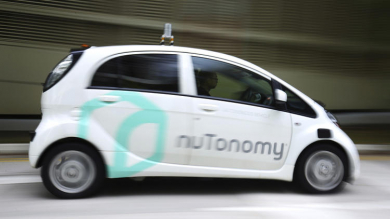