San Francisco sours on rampant delivery robots: 'Not every innovation is great'

n something of a reversal for San Francisco, a city that has served as a petri dish for disruptive innovations in recent years, lawmakers this week passed strict regulations to reduce the number of delivery robots that technology startups have introduced to the city’s sidewalks.

“Not every innovation is all that great for society,” said the San Francisco supervisor Norman Yee, who authored the legislation. “If we don’t value our society, if we don’t value getting the chance to go the store without being run over by a robot … what is happening?”

Yee believes that his legislation is the “first and most restrictive” of its kind. Robot permits will be capped at three per company, and nine total at any given time for the entire city. The robots will now only be allowed to operate within certain industrial neighborhoods, on streets with 6ft-wide sidewalks, and must be accompanied by a human chaperone at all times.

They’ve been called the ‘only sane solution’ for urban deliveries and are already being tested, but are pedestrians prepared to jostle for space?

It’s a far cry from other jurisdictions, such as Washington DC, Virginia, Idaho and San Francisco’s neighboring Redwood City, where lawmakers have acted to legalize sidewalk robots.

But in San Francisco, delivery robots have quietly taken to the sidewalks of over the past year. Companies including Marble and Starship are developing “robots as a service” business models, whereby food delivery apps contract with the robot companies to perform their deliveries.

At scale, the robots could significantly cut down on delivery vehicles (and labor costs), but they also take up space on sidewalks, where bicycles, Segways, and sitting or lying humans are already banned. Since taking on the issue, Yee said that his office had become something of a repository for photographs taken by angry residents of the robots clogging the sidewalks amid baby strollers, bus stops, street vendors, and pedestrians. 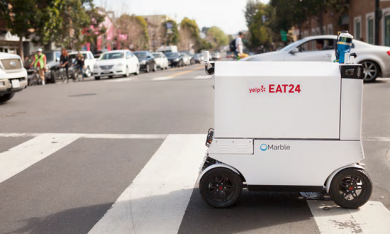