Delphi today announced it is purchasing the self-driving car company Nutonomy for $450 million.

Founded in 2013 by Dr. Karl Iagnemma and Dr. Emilio Frazzoli, Nutonomy is Boston-based company that develops autonomous vehicle technology. The core thought behind this purchase is to accelerate the pace of developing autonomous vehicles with Delphi.

Delphi CTO Glen De Vos noted on a conference call about the purchase Delphi wants to be a leader in autonomous vehicles but sees the first opportunity in commercial vehicles. De Vos sees the technology accelerating into the commercial space and then bleeding over into consumer vehicles over time.

By buying Nutonomy, De Vos sees Delphi gaining a significant advantage in intellectual property and engineering talent. “This [purchasing Nutonomy] helps us deliver at scale,” he noted. Nutonomy adds over a 100 employees to Delphi’s rank where over 100 people already work on autonomous vehicles.

“Our mission has always been to radically improve the safety, efficiency, and accessibility of transportation worldwide,” said nuTonomy co-founder and CEO, Karl Iagnemma said in a released statement. “Joining forces with Delphi brings us one step closer to achieving our goal with a market-leading partner whose vision directly aligns with ours. Together we will set the global standard for excellence in autonomous driving technology.”

The purchase cost Delphi $400 million in cash and will pay out an additional $50 million in performance based pay-outs. Nutonmony had raised $19.6 million in funding from among others Highland Capital Partners, Samsung Ventures and Detroit-based Frontinalis Partners. The two companies started talking a few months back after Delphi starting looking to scale its autonomous vehicle operations.

Nutonomy’s partnerships with Lyft, Groupe PSA and others will continue and the company will work in parallel with Delphi from its home base in Boston.

Upon completion of this purchase, Delphi will have autonomous driving operations in Boston, Pittsburgh, Singapore, Santa Monica, and Silicon Valley and the company aims to have 60 autonomous cars on the road by the end of the year. 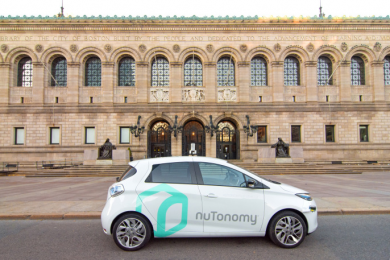