KT has gained government permission to test-drive its autonomous bus on public roads for the first time in Korea.

"The Ministry of Land, Infrastructure and Transport has granted clearance for road trials of dozens of autonomous sedans and SUVs, but this is the first time for it to grant approval to test-drive a self-driving bus on public streets," a KT official said.

Since 2015, the nation's second-largest wireless provider has developed autonomous cars. It unveiled the driverless bus in a March event.

KT said an autonomous bus requires more advanced technologies than a self-driving car or SUV because it does not allow electronic control on handles, brakes or other auto parts and is long and heavy.

"In that respect, high-profile carmakers with advanced technologies such as Mercedes-Benz and Scania are leading players in the development of autonomous buses," the official said.

The KT bus, capable of driving on its own, can also move in a "platoon" formation, with one bus following only inches behind the next.

KT is now testing the bus' autonomous driving technology on expressways and plans to carry out a variety of tests gradually.

"The government permission enables us to test-drive the autonomous bus under actual conditions," the KT official said. 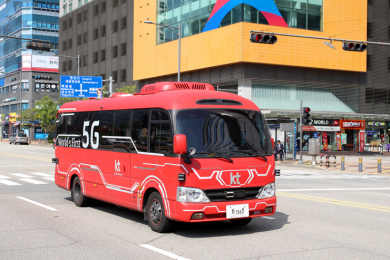