In Taiwan, Modest Test of Driverless Bus May Hint at Big Things to Come

Rolling with a barely audible hum beneath banyan trees, a brightly painted shuttle bus cruised through a university campus here.

The electric vehicle crawled along at a speed of no more than six miles per hour. And only 12 passengers could fit inside. But the bus also drove itself, raising hopes in Taipei that autonomous public transportation would be up and running here within a year.

“The idea of one day being able to ride around this city in driverless vehicles is quite exciting,” said Amber Chen, who was riding with her son Ruey-She, 8.

The bus tests are partly to prove that the autonomous-driving technology is safe to deploy on the city’s busy streets, and partly to gather the data needed to improve the artificial intelligence that steer such vehicles. The effort, one of the earliest in Asia, could help position Taiwan as both a pioneer in autonomous public transportation and, if things go according to plan, a producer of driverless buses.

So far, the bus being tested, the EZ10, has breezed through its trials on the campus of National Taiwan University, which have been in progress since May

But successful testing on a closed course at low speeds can only reveal so much about how the buses would fare in traffic. Getting them on the road at busy times is the next step, and the program’s backers are eager to see that happen quickly.

One obstacle: Despite active support from Taipei’s municipal government and its mayor, Ko Wen-Je, the testing has only tacit approval 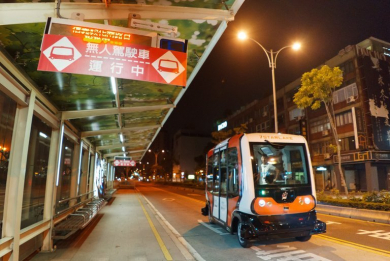