Swedish tech startup Einride has built a full-scale prototype of its T-Pod, the electric autonomous transport vehicle it hopes will eventually replace smaller heavy-duty trucks, featuring remote control operation and a 200 kWh energy capacity with a maximum range of around 124 miles.

The Einride T-Pod is unique in its design, as you can see, but it’s designed from the ground up for remote human operation and driverless functioning, meaning you don’t need the traditional crew cabin, and can instead build a vehicle tailor-made exclusively for transporting goods efficiently. The T-Pod will be put into service first in a route between Gothenburg and Helsingborg by 2020 in Sweden, with 200 T-Pods traveling the route, which will be outfitted with charging stations.

The overall T-Pod network will be able to move up to 2,000,000 pallets of goods per year, which Einride says will have roughly the CO2 emissions equivalent of 400,000 passenger cars traveling the equivalent distance. Einride also says it might expand the route even farther earlier than planned, given the strength of client demand.

These T-Pods are an interesting alternative to autonomous retrofit and conversion of semi trucks. The remote control mechanism is also interesting, and Einride says it adds “human flexibility and decision-making” alongside the vehicle’s autonomous capabilities, with one driver able to control multiple T-Pods at once. 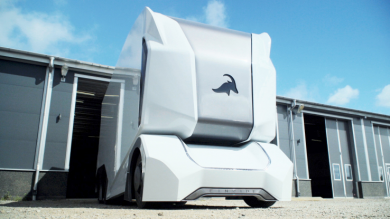