The vehicle traversed a mile-long stretch of North Avenue, checking sensors embedded in the “smart corridor”

A boxy red bus-like vehicle traversed a mile-long stretch of North Avenue on Thursday, from Ponce City Market to Midtown, to help usher in a new era of transportation in Atlanta.

While the route was unremarkable, the driver—or lack thereof—made the trip unique.

The test of self-driving Transdev EZ10 marked the first of what promises to be many trips by autonomous vehicles on the streets of Atlanta.

ABC reports the vehicle made multiple trips along the route, ferrying media members (and Mayor Kasim Reed) eager to see the technology at work. Noted the news station: “The test on North Avenue in the city's bustling Midtown area meant that Atlanta has become one of the largest urban areas to test autonomous vehicles, joining Sao Paulo and Shanghai.”

While the vehicles are capable of driving themselves, drivers were on hand, but they “made minimal human interventions” during the trips. The demonstration doubled as an opportunity to test the “smart” technology—comprising a range of sensors and relay devices—added to the road in the last year.

With the concept tested, more refinements will be made, as the system is expanded to stretch more than two miles to Georgia Tech.

Additional technologies to be added to North Avenue include adaptive traffic signals, video surveillance systems, connected vehicle systems, and even technology that would allow emergency vehicles to preempt traffic lights to respond to an emergency. It’s all part of a push to allow Atlanta to be an early adopter of autonomous technology, reports the Atlanta Journal-Constitution. 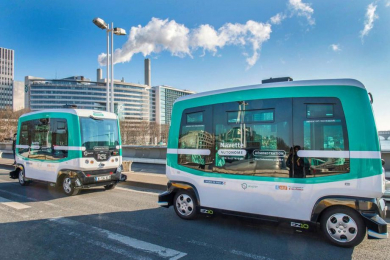