The Chevy Bolt EVs will be built with the hardware necessary to enable fully self-driving cars.

General Motors and its self-driving subsidiary Cruise have started to build Chevy Bolt electric vehicles that are being produced with fully autonomous hardware. In other words, once the software is ready — perhaps within months — these third-generation Bolt EVs will be able to operate themselves completely without a driver.

GM is hardly the only company trying to build self-driving electric cars. But what sets it apart is its production capability to manufacture them at scale — something Tesla, say, currently lacks.

Today, most semi-autonomous cars that are operating on the streets of cities like Pittsburgh and San Francisco have the necessary radars and sensors essentially glued onto them after they come off the assembly line. Now, these Bolt EVs — of which approximately 50 have already been produced — will have all that hardware built in.

“When Cruise first started we quickly retrofitted the Chevy Bolt EV with our technology,” Cruise CEO Kyle Vogt said. “You’re bolting things on roofs and stripping wires and ripping out interior panels to run wires in the car. A lot of blood, sweat and tears go into those cars and it’s hard to keep them running. We’re on our third generation of the vehicle and this is the real deal.” 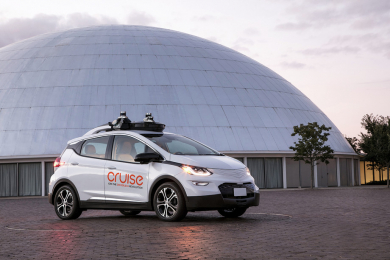