US Delivery without drivers: Domino's, Ford team up for test

No ring of the doorbell, just a text. No tip for the driver?

No problem in this test, where Domino's and Ford are teaming up to see if customers will warm to the idea of pizza delivered by driverless cars.

Starting Wednesday, some pizzas in Domino's hometown of Ann Arbor will arrive in a Ford Fusion outfitted with radars and a camera that is used for autonomous testing. A Ford engineer will be at the wheel, but the front windows have been blacked out so customers won't interact with the driver.

Instead, people will have to come out of their homes and type a four-digit code into a keypad mounted on the car. That will open the rear window and let customers retrieve their order from a heated compartment. The compartment can carry up to four pizzas and five sides, Domino's Pizza Inc. says. 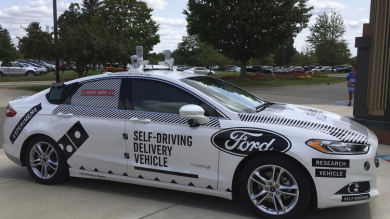