The vehicles can find their way along real roads in order to deliver bags of food to Greenwich residents.

Fire up an app, order some groceries, and get them delivered to your door. So far, so normal, thanks to the likes of Amazon Fresh and Instacart. But in one part of London, that kind of delivery is currently being made by a self-driving van.

The deliveries are made possible by a vehicle called CargoPod, which was developed by Oxbotica, an autonomous-vehicle spinoff of the University of Oxford, and makes use of the online grocery retailer Ocado’s infrastructure. It’s a small electric vehicle decked out with lidar sensors and stereo cameras, which uses Oxbotica’s autonomy software to sense obstacles and navigate roads without human intervention. (Though, as in America, British law still requires a human safety driver behind the wheel.)

On the back of the vehicle are eight pods, each with a crate that can hold three bags of groceries. The van is filled by human hands from a small distribution center—in this case, a larger Ocado van, which stores 80 of those crates—and sets off following a route to its drop-offs, which is broadly planned in the cloud but ultimately executed by the vehicle. When it arrives at an address, the customer is alerted via smartphone and must press a button on the vehicle to open a pod door and grab the groceries. 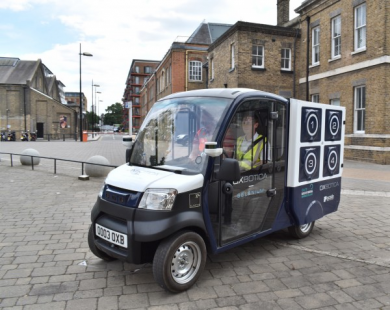