Delivery robots are seen as novelties, job-killers and a gimmicky way for restaurants to reach nearby customers. The newest entrant in this logistics segment is a Swiss startup called Teleretail AG.

The company has put a twist on the personal delivery device—its machines, still in prototype, were designed to cover long distances, up to 50 miles, and to serve rural and suburban markets along with city residents.

Like its peers and competitors, including Starship Technologies or Marble for example, Teleretail employs some of the same systems developed for self-driving cars, including sensors, computer vision systems and GPS-aided navigational systems. The startup has obtained some of the components and equipment it used to build its prototypes from sponsors like Bosch, Nvidia, and lidar-makers SICK. Wherever it tests the robots, you can see their stickers adorned to the machines. 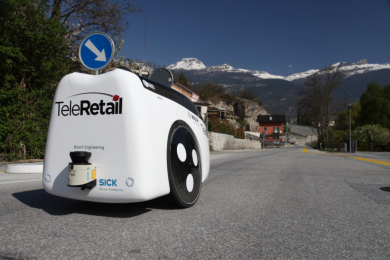