New robot laws are popping up across the country

The new laws, both of which were passed this year, were written with the help of Starship Technologies, a delivery-robot company based in Estonia that was founded by Ahti Heinla and Janus Friis, two of the co-founders of Skype.

While Starship isn’t currently working in Virginia or Idaho, the company can now legally operate its robot in those states — without a person controlling it — on sidewalks and crosswalks. Starship’s 40-pound robots are designed to deliver things like meals, groceries and other on-demand goods. Similar legislation is now being proposed in Wisconsin.

But other robot-delivery companies might not be able to take advantage of the new laws.

That’s because the policies that Starship has helped to champion only permit robots under a certain weight to operate autonomously in each state — and Starship’s potential competitors don’t all make the cut. In Virginia, the law states that ground robots have to weigh under 50 pounds to operate legally. In Idaho, the weight limit is 80 pounds. 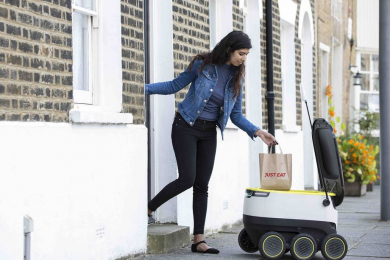