But either way, it’s what’s inside that counts. In one of the most radical approaches yet in the quest to make driverless cars a living space, VW is sending a signal that the focus of the industry could well be shifting.

When Volkswagen unveiled their new concept car – Sedric – at the Geneva International Motor Show, the vehicle’s appearance caused quite a few fun comments and raised some eyebrows. “Giant toaster”, “Teletubby” or “Pokémon” were only some of the comparisons made by the media. And indeed, the exterior design of the fully autonomous pod looks neither flashy nor sporty, attributes which have sold cars in all of their history. But still, some media outlets seem to have missed the point: the VW Sedric (short for self-driving car) is all about the interiors. With their radical focus on the vehicle cabin, the biggest vehicle manufacturer in the world points to what might be the next battle field of the car industry: making cars as homely as possible. 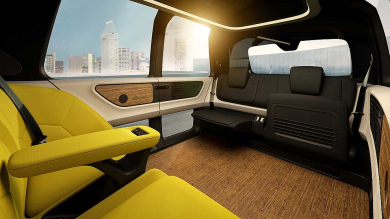