Ohio’s first self-driving shuttles hit the streets in downtown Columbus in mid-November, kicking off the first phase of a project designed to test, operate and evaluate self-driving vehicles. The low-speed transportation shuttles are operated by May Mobility, a self-driving vehicle startup, which commenced testing and route mapping around the Scioto Mile this week.

The all-electric vehicles, which have a top speed of 25 miles per hour, are outfitted with sensors, cameras and intelligent software to map the route and monitor the environment. The shuttles are expected to begin picking up passengers in December once testing and mapping is complete. As many as 10 shuttles will service destinations along the Scioto Mile, a parkland area in downtown Columbus, including the Center of Science and Industry (COSI), the Smart Columbus Experience Center, Bicentennial Park and the new National Veterans Memorial and Museum. 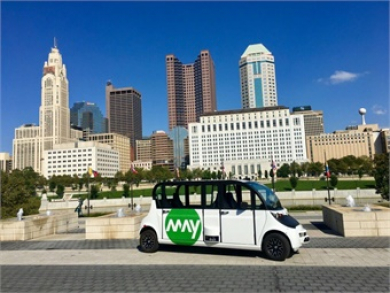