A joint venture aims to develop autonomous vehicles and deploy them on London’s streets by 2021.

The venture has been formed by private hire car business Addison Lee and AV software company Oxbotica. The former company led the MERGE Greenwich project which simulated and tested self-driving cars in south-east London and the latter is a part of the Driven consortium that is currently trialing AVs in Oxford, England. The companies say the venture’s “long-term aim” is to capitalize on the connected AV technology market, which they believe to be “growing”.

Addison Lee claims it will “offer affordable, quality, ride-shared services to passengers currently under-served by existing driven transport modes”, and both companies claim any services eventually launched will be “safe and environmentally friendly”. They say they’re planning to collaborate on the creation of “digital maps of more than 250,000 miles of public roads in and around the capital” that will serve as a record of all key road infrastructure like traffic lights and road signs for the AVs they develop.

Addison Lee and Oxbotica add that they may consider launching AV services at airports and campuses also. Oxbotica CEO Graeme Smith claims the move “represents a huge leap towards bringing AVs into mainstream use on the streets of London”.

Addison Lee CEO Andy Boland says the venture will “help address congestion, free space used for parking, and improve urban air quality through zero-emission vehicles”. However, at a recent meeting of the Greater London Assembly Transport Committee, the company’s own head of regulatory and external affairs Andrew Wescott admitted any attempted deployment of AVs in the city would face “challenges” and have to be regulated by Transport for London (TfL). 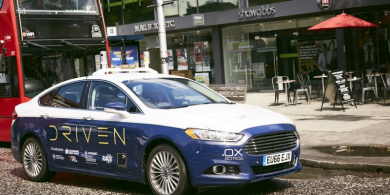