Ford used the Hannover Motor Show to introduce the updated Transit family, but the company also had a surprise – the F-Vision Future Truck concept.

Unveiled earlier today, the F-Vision isn’t a preview of the next-generation F-150 but rather a futuristic semi created by Ford Otosan in Turkey. The company didn’t say much about the model, but the images show it has an aerodynamic design with a distinctive windscreen which blends into the body.

The concept also has massive wheels and a distinctive lower section which features air intakes that are surrounded by slender LED lights. We can also see video camera side mirrors and a flush-mounted door which provides access to the cabin.

The aerodynamic design extends to the cargo trailer as it features recessed wheels and sculpted panels. The end result looks a lot more futuristic than the traditional white box which are a common sight on the highway.

Ford was surprisingly tight-lipped about the concept, but Motor Authority says the F-Vision has an electric powertrain and a Level 4 semi-autonomous driving system. The latter should enable the truck to drive itself in certain situations.

The concept also uses lightweight components and features an “interactive front end” can reportedly display different designs. That’s pretty vague, but one of the live photos shows a diamond-like pattern being projected onto the front of the semi. 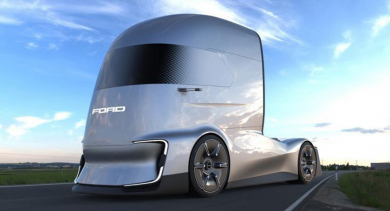