There is a strong and natural relationship between robots and rubber duckies. Seriously. Being small, cheap, colorful, and pleasingly compliant, duckies became a sort of physical Stanford Bunny—when you want to show the scale of a robot or give a robot something to visually locate or grasp or something, just toss a duckie in there. This relationship was formalized through the 2016 ICRA conference, where duckies inspired a bunch of videos and some poetry that is surprisingly not terrible.

Since then, duckies have been taking over in robotics—at this point, I’m fairly certain that Andrea Censi at ETH Zurich is held hostage by (and doing the bidding of) a small army of little yellow duckies. This would explain why an entire duckie village full of duckie-size autonomous cars that you can learn how to program is now on Kickstarter, with the hope that you’ll help them take over the entire world.

Duckietown is based on an MIT engineering course (2.166), first taught in 2016. It’s designed to be an affordable, modular, scalable, duckie-filled introduction to autonomous vehicles. 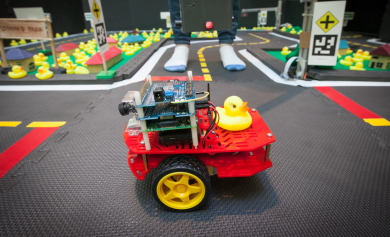