FiveAI in the race to launch driverless cars in Europe

Anyone walking around the South London suburbs of Bromley and Croydon this week might spot a bright new addition to the roads: A futuristic sky-blue Ford Fusion laden with sensors.

FiveAI, a British driverless car startup, is putting five of these vehicles on UK roads to gather data to train its autonomous vehicles. The cars will collect information for the next 10 months to understand real-world road layouts, traffic flow, and the behaviour of other road users.

Part of the reason the cars look so lurid is so that the public knows who's gathering data. FiveAI said it is gathering information in a way that is compliant with Europe's strict privacy regulation, the GDPR, and no individual would be identifiable from the images it captures through its cameras.

While these cars will be driven by humans at all times, the training data they gather will eventually inform FiveAI's efforts to bring shared, driverless taxis to London in 2019. The company said in May that it will begin trialling driverless cars on public roads before the end of 2018. 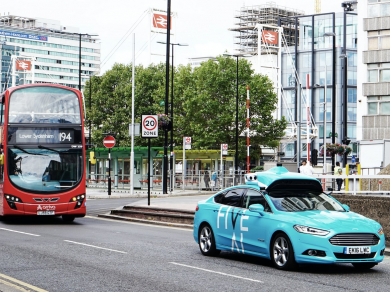