Volvo Trucks has successfully demonstrated three semi trailer combinations linked together as a wireless platoon with the third truck in the ‘chain’ operating autonomously and not only keeping the pre-determined distance from the one in front but also performing its steering functions without any driver input.

Taking place on Volvo’s closed test track at Stora Holms near Gothenburg in Sweden on Wednesday, the demonstration brought together two of the major projects on which Volvo has been working and despite taking place in less than ideal weather the trucks were able to be operated at highway speeds in close proximity to each other at an enhanced level of safety.

When connected wirelessly in the platoon the second two trucks mimic the acceleration and braking of the lead vehicle with the aim to maintain a close gap between each to take advantage of the lower wind drag area following in the slipstream of the lead truck.

The distance separating each vehicle can be set either as a linear distance or a time ranging from five to even one second.

Volvo used the opportunity to showcase its developments in the autonomous vehicle space by having the driver of the third vehicle switch to autonomous mode and have the truck follow at close distance with the driver’s hands off the pedals and steering wheel.

The European Union is progressing with work on the standardisation of the system’s compatibility across multi-branded fleets to enable non-competitive co-operation between different manufacturers.

“Volvo Trucks is not intending to deliver driverless trucks. This project is more about supporting and assisting the driver,” said Hayder Wokil, Volvo Trucks, Director of Mobility and Automation.

“The trucks will still be driver-centric yet in certain conditions will not involve feet, hands or even attention.”

Central to the development has been the next generation of the Volvo Dynamic Steering system (VDS), which was given its first practical exposure to the world media at the event. VDS can now assist the driver to keep within lane markings by actually gently intervening and adjusting the steering rather than merely providing an audible or visual warning. 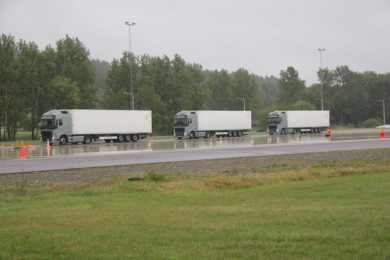