This is Toyota's first investment in the self-driving delivery space, signaling increased attention in last-mile delivery from major players.

Self-driving robots for urban delivery are on the way, aided by investment from some big players in the industry.

Boxbot, an Oakland startup that makes self-driving delivery robots, just raised $7.5 million in a seed round that included investment from Toyota AI Ventures, the AI-focused venture subsidiary of the recently-formed Toyota Research Institute.

"I've previously argued that it will be years before we share the roads with fully autonomous, Level 5 self-driving cars," said Jim Adler, managing director of Toyota AI Ventures. "That said, there are specific use cases and environments where autonomous vehicles could hit the roads now. Self-driving delivery is another example of just such a use case.

It's Toyota AI Ventures' first investment in the space, signaling a new phase in the investment cycle for companies developing last-mile delivery robots.

Boxbot, founded by Tesla and Uber alums in 2016, is one of a spate of companies developing small unmanned vehicles for last-mile delivery. Just last week, I wrote about Robby, the Bay Area robot currently delivering for Doordash, Instacart, and Postmates in select California testbeds. 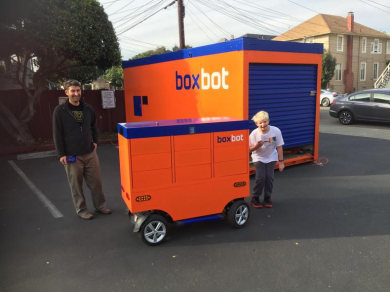