Driverless ‘pods’ are being fine-tuned and prepared to be tested on the streets of the UK with the country set to have the biggest fleet of autonomous free-roaming vehicles in the world.

Each pod is being fine-tuned for their autonomous control systems before they will form part of a ‘whale’ - the collective name given to the fleet - that could eventually do up to 120km of journeys every day.

Commenting on the milestone moment, Dr Richard Fairchild, director of autonomous mobility programmes at Aurrigo, said: “This is another major milestone for UK Autodrive and our country’s desire to be at the forefront of new transport solutions. Importantly, it is also a massive breakthrough for our business, as we now not only have the autonomous technology in place, we also have a production line capable of being ramped-up to deliver pods in low and medium volumes.”

Aurrigo has invested in the development of a control centre in the town centre and has recruited the first three people to support the roll-out as part of what will eventually be a ten-strong team.

This puts the company in a strong position to safely and effectively oversee the testing before it goes live with passengers in the summer when up to 40 pods that will be capable of travelling up to 15 miles per hour and lasting up to 60 miles off one charge will operate from Central Station to Campbell Park and Silbury Boulevard to Avebury Boulevard. 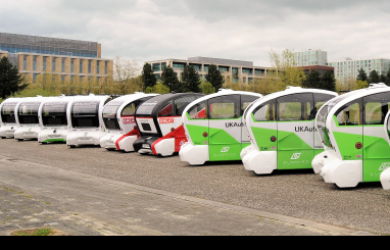