Transdev launched its third autonomous vehicle operation in Florida, in partnership with the Gainesville Regional Transit System (RTS), the Florida Department of Transportation, and the University of Florida.

Gainesville will become the latest city in Florida to launch AV operations with a new route connecting passengers from the University of Florida to Downtown Gainesville. The new service will serve as a public transit supplement and will not replace any current route. Regular service is expected to begin this summer with a dedicated operator on board to ensure a smooth startup, with eventual plans to have the vehicle operate with full autonomy. The EZ10 Shuttle can hold up to 12 people and will travel in mixed-use traffic at speeds of up to 15mph.

“Autonomous vehicles are expanding the mobility ecosystem. We are using the vehicles to supplement existing transit options and form new and better connections that did not exist before,” said Dick Alexander, executive VP, business development, at Transdev. “Gainesville is the latest visionary city to understand how AVs can revolutionize urban transit and we are looking forward to delivering these next-era solutions for residents and visitors throughout Florida.”

Transdev’s autonomous vehicle network is already well established in Florida with operations currently running in Babcock Ranch; a master planned development near Ft. Myers, and in a pilot for the Jacksonville Transportation Authority focused on demonstrating the feasibility of AV technology for their planned “Ultimate Urban Circulator” (U2C) project. In Babcock Ranch, Transdev has partnered with developer Kitson and Partners to develop a fleet of autonomous vehicles for on-demand use in and around the planned town of 50,000 residents to reduce dependency on multiple-car homes. 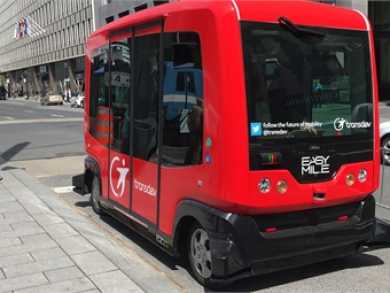