China’s equivalent to Google, Baidu, is about to begin serial production of electric shuttle buses that will self-drive in selected areas.

And it is that autonomy behind that self-drive that may be Baidu’s concern rather than just making EVs themselves.

Baidu has been making advances in the EV market before when it invested in WM Motors for example. This time however, the internet giant of the People’s Republic is looking to produce its own electric vehicles, small buses in this case.

Together with King Long, they will make a first series of 100 such electric shuttle buses starting this July. Baidu says each bus will be able to carry 14 passengers, with 8 seated. They are to drive around confined areas such as airports, controlled by Baidu’s open source autonomous driving software, Apollo.

It is the latter that is likely Baidu’s main concern. Jenny Wu, managing partner of Baidu Capital, summed up their interest as follows: “Baidu is dedicated to building a new generation artificial intelligence open platform for autonomous driving in China,” and whilst she referred to WM Motors back then, the same can be said about Baidu’s latest shuttle venture.

The strategy resembles the electric car projects of Google and Apple that positioned themselves as technology supplier foremost rather than turning into carmakers. In direct competition however, a recent report from California’s Department of Motor Vehicles showed that Baidu’s self-driving cars didn’t perform as well as those from Google’s sister company Waymo. Between October 2016 and November 2017, human drivers had to take over the wheel in Baidu’s autonomous vehicles every 66 kilometres, while Waymo’s autonomous electric cars required human help every 9 kilometres.

In terms of real-life applications, Apple has found a partner in Volkswagen for example, while Waymo have announced a long-term partnership with Jaguar to launch a 20,000 strong fleet of self-driving taxis based on the I-Pace. Moreover, Google’s Waymo is investing into commercial applications of its self-driving vehicles and also works with Ford for example. 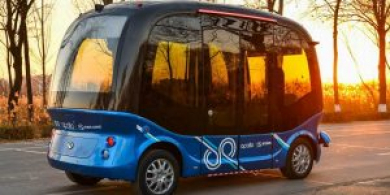