South Korea's No. 1 mobile carrier said two of its self-driving cars operated on a 2 kilometer-track earlier in the day, exchanging real-time traffic information through its ultra high-speed network.

The company said the demonstration marks the first time in the world that 5G has been used in autonomous car technology. It claimed that the test will help the industry move forward so as to make it possible for full autonomous driving in the upcoming era of 5G.

The cars were able to sense the outside environment and avoid obstacles, slowing down at a school zone and even stopping when a mock-up that looked like a child appeared on the road suddenly, the company said.

SK Telecom said the vehicles also increased their speed when there was sufficient distance from other automobiles. 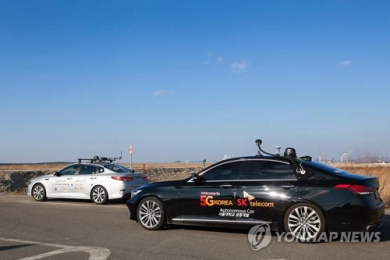