Nissan to trial robo-taxis in Japan

The company is partnering with Japanese software company DeNA, which operates online services for the gaming, healthcare and automotive industries.

It will adapt a Nissan Leaf electric car, which passengers will summon using an app.

The free trials will be held over a two-week period in March in Yokohama.

The Easy Ride system could be launched in Japan in the early 2020s.

"With 'more freedom of mobility' as its concept, Easy Ride is envisioned as a service for anyone who wants to travel freely to their destination of choice in a robo-vehicle," Nissan said in a statement.

"The goal is to allow customers to use a dedicated mobile app to complete the whole process, from setting destinations and summoning vehicles to paying the fare."

During tests, there will be a staff member in the driver's seat to comply with Japanese law.

Customers, who can apply from now until 15 January, can select local destinations and sightseeing routes.

Meanwhile, Japanese robotics maker ZMP is working with a Tokyo taxi operator to develop self-driving taxis for the 2020 Tokyo Olympics. 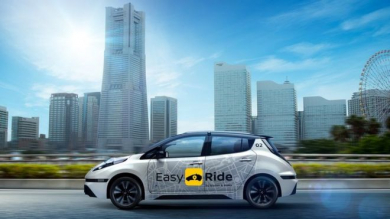