Las Vegas to Jump Ahead in Driverless Shuttle Race

12-month pilot is scheduled to launch on city roads Nov. 8

On Wednesday, Las Vegas residents and visitors will get a chance to hop on the country’s first autonomous shuttle to operate on public roads, thanks to a partnership with AAA.

The automotive association bested Bishop Ranch’s autonomous shuttle in the race to become the country’s first driverless shuttle that’s open to the public. The EasyMile shuttle has been trolling the San Ramon office park since March, but has been picking up passengers on an invite-only basis.

The Contra Costa Transportation Authority, which is partnering with Bishop Ranch to pilot the shuttle, received approval from the federal government early last month to drive the shuttle on public roads traversing the 585-acre office park, but it’s still waiting on the California DMV to give the final green light.

In the meantime, AAA’s Northern California chapter, which also includes Nevada and Utah, will kick off its one-year pilot program on Wednesday with the hopes of getting at least 250,000 passengers to hop on board Las Vegas’ eight-person shuttle within the span of 12 months, said John Moreno, a spokesman for AAA Northern California. It’s all part of an effort by the automotive association to carve out a lane for consumers in the development of autonomous vehicle technology, Moreno said.

“(AAA) was born really from the transition from the horse and buggy to the combustion engine,” Moreno said. “What’s happening now with autonomous vehicles, it’s no secret that cars are changing, mobility is changing, how people view transportation is changing.”

“So, we wanted to be at the forefront of that, similar to where we were 100 years ago when the car was coming around, and we wanted to make sure that people had a voice for how this technology and this new product was implemented and operated,” he said. 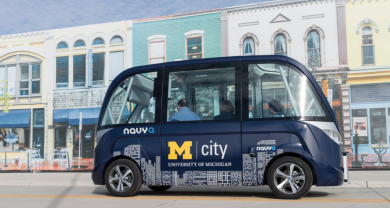