6 Months In Business, Autonomous Vehicles On The Road: Meet Ann Arbor's May Mobility

A shuttle pulls away from the curb in downtown Detroit on a weekday night, ferrying workers between their parking garage and office. General Motors’ skyscraper headquarters, the Renaissance Center, looms ahead.

It’s a setting that’s indelibly connected to the car and driver. But this electric car has a 49-inch LCD screen in place of a dashboard. There’s no steering wheel, and an engineer occupies the driver’s seat. In the Motor City, the future is here, and it has a top speed of 25 miles per hour.

“We are fully autonomous now,” Edwin Olson, the CEO of Ann Arbor startup May Mobility, tells the shuttle’s five other occupants.

Olson’s company launched in May, a coincidence with the company’s name. The robotics lab where Olson works at the University of Michigan is called “APRIL,” for Autonomy, Perception, Robotics, Interfaces and Learning.

“‘May’ seemed like the natural thing for what comes next,” Olson said. The startup recently closed its second equity funding round, he said.

The university holds the key to how a 6-month-old company is testing an autonomous shuttle on city streets; most or all of May Mobility’s staff have a maize-and-blue connection.

While the autonomy stack grafted on a Polaris Industries Inc. PII Gem electric shuttle is the first built under the May Mobility moniker, it’s the sixth completed by the team behind the company, said chief technology officer Steve Vozar. 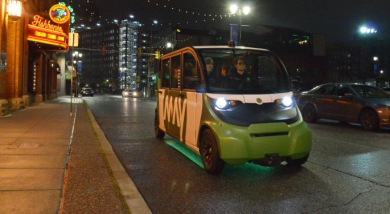