A new, autonomous shuttle service has been launched in the heart of Europe’s largest business district, Paris La Défense.

The service was launched by NAVYA and KEOLIS, in partnership with Paris public transport authority Ile-de-France Mobilités (Ex-STIF) and DEFACTO, following its inauguration on 3 July 2017.

The service will be a six month trial, using three NAVYA ARMA fully autonomous, 100% driverless and electric shuttles. It aims to meet the mobility needs of passengers, and remain in keeping with the city of Paris’s approach to innovation in favour of new sustainable mobility solutions.

The service is free of charge for users and offers three different routes, seven days a week, serving the main areas of the Paris La Défense district, which welcomes 500,000 visitors every day. During the first three months, operators will be present on-board the shuttles. However, the second phase will see the NAVYA ARMA shuttles running in full autonomous mode, with no operators on-board. This is the first time that such a trial will have been conducted in a semi-pedestrian area. 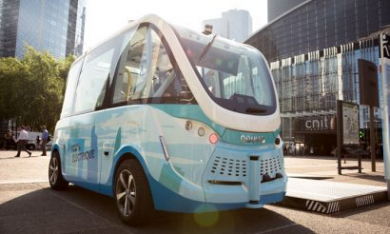