The world is becoming increasingly automated, and a new self-driving bus in Finland is evidence of this.

Beginning in the fall of 2017, the Finnish capital will launch a new autonomous electric “RoboBusLine.” According to the City of Helsinki the line “represents a shift from an experimental phase to regular, scheduled public transit service with self-driving buses.” Not only will the self-driving vehicles reduce the costs of transportation and improve access to public transit – they will also reduce the amount of cars that are on the road and slash emissions.

In August of 2016, the Sohjoa project (an EU-financed initiative by the six largest cities in Finland, Finnish universities and transportation authorities) launched two EasyMile EZ10 electric minibuses in Helsinki. Reportedly, the initiative is part of the EU-financed mySMARTLife program, in which European cities are encouraged to develop energy-efficient mobility to reduce energy consumption in cities by 10-15 percent.

So far, the electric minibuses have been tested in real traffic conditions – and they will continue to be monitored in urban areas until August 2017. Each bus has an operator on board in case of an emergency and travels at about 7 mph (11 km per hour), learning the route and accruing knowledge as it transits. Said Sohjoa project manager, Oscar Nissin of Helsinki Metropolia University of Applied Sciences, “We focus on a number of aspects including sensor technology, user experience, and how to complement overall public transit services with self-driving buses.” 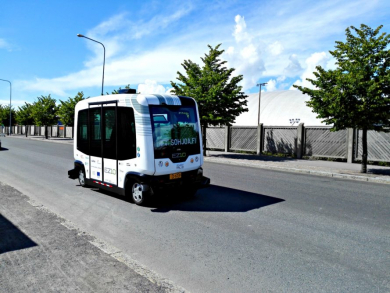