Another self-driving vehicle hits the road for a test run, this time in Zhuzhou, a city in China’s Hunan Province.

Looking sort of like a caterpillar or a snake, the “rail bus” is a cross between a bus, a train, and a tram, and appears to glide on the surface of a road, as the wheels underneath are not visible.

It was developed by CCRC, a Beijing-based supplier and manufacturer of rail transit equipment, and it uses a system of sensors to guide itself along road markings instead of on a track or attached to a cable.

Called the Autonomous Rail Rapid Transit, or ART, the autonomous vehicle runs on a charge, travels at speeds of up to 70 kilometers per hour (about 43 miles per hour), and is more cost-effective than building out a subway.

Made up of three articulated sections, the rail bus can hold up to 307 passengers and was developed to relieve congestion on China’s city streets. Although a driver was present for the test drive along the 3.1-kilometer route, future rides will be completely autonomous. Watch it in action, below. 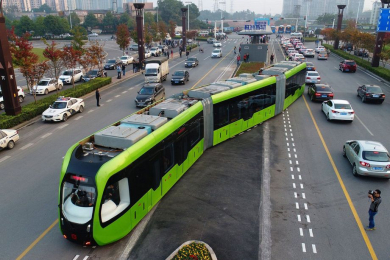