Toyota Will Test Self-Driving Cars With AI By 2020

Like many other automakers, Toyota is testing prototype self-driving cars on closed courses and public roads.

It's even got one with two steering wheels. But the Japanese automaker is preparing to test more sophisticated technology.

Toyota will begin testing self-driving cars that use artificial intelligence to "talk" to human drivers around 2020, reports Reuters. The car used in these tests will be based on the Toyota Concept-i that debuted at CES 2017 back in January, and featured an AI personal assistant named Yui.

"By using AI technology, we want to expand and enhance the driving experience, making cars an object of affection again," Makoto Okabe, general manager of Toyota's electric car business and planning division, said in an interview with Reuters.

The Toyota Concept-i was designed to let drivers toggle between automated and manual modes. Its AI can also monitor driver behaviors to predict a person's mood and attentiveness, allowing the autonomous systems to take over when the human driver isn't up to the task, or just doesn't feel like driving. 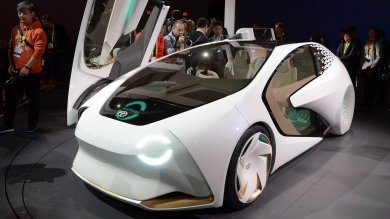