The company has also taught its cars to hear and see sirens and pull over.

What happens when self-driving cars gets into an accident?

Alphabet’s self driving car division Waymo has been testing its fleet of robot cars in four states across the country — Washington, California, Arizona, and Texas — and it has started to work with local law enforcement agencies and first responders to figure out what to do after a collision and create new protocols.

That includes what a fully driverless car should do when it hears a siren coming toward it — yes, Waymo driverless cars can hear — as well as how police officers, or first responders can access the cars in emergency situations.

In a new 43-page report (pdf) that Waymo published Thursday, the company detailed some of its efforts to respond to (and avoid) collisions. Those efforts can be broken up into three parts: How the cars stop in unsafe working conditions; how the cars respond to sirens/emergency vehicles; and what happens after an accident. 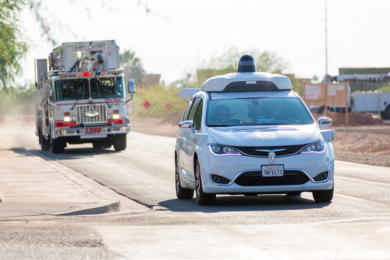