The NAVYA shuttles will travel on a loop around the park, serving four stops and taking around 12 minutes per trip and will run until 30 September 2017.

This is the first time the NAVYA shuttles have been trialled in the UK by transport group Keolis, the operator of the UK’s only other fully autonomous network, the Docklands Light Railway. The partnership is looking at the possibility of using these vehicles for a range of locations, including airports, hospitals, university campuses, tourist attractions and shopping centres.

“We are delighted to be a part of the event here at the Queen Elizabeth Olympic Park and to be given the opportunity to showcase our innovative smart mobility solution in this emblematic location which is in itself, a representation of change and innovation,” said Alistair Gordon, chief executive of Keolis UK. 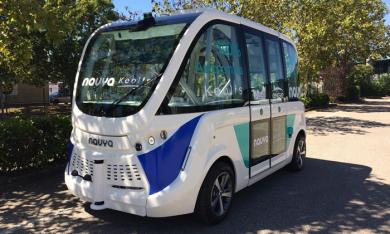