Three fresh prototypes for driverless cars have been unveiled by a top group with ambitious goals of getting the vehicles onto Britain's roads by 2019.

A self-driving Range Rover Evoque and two Ford - a Fusion and a Mondeo - will be part of a fleet of six vehicles that will form part of trials on public roads between London and Oxford.

It received millions in funding from the government as part of its plans to plough £2bn into cutting edge technology.

“Testing the technology that enables autonomous driving is clearly an important part of the development process," said director of the RAC Foundation Steve Gooding, adding that building public confidence in the technology was key.

“High visibility branding of the test vehicles is a good thing, as they move from extensive off-road trials to streets where they’ll be mixing with everyday traffic, so that we know not to panic when we see one approaching with no-one holding the steering wheel."

The tests are aiming to get vehicle of level 4 autonomy - the second highest - doing journeys from the city to the capital via motorway and urban roads in just two years time. Driven is already taking on challenges such as roundabouts, junctions, and interactions with pedestrians and cyclists its facilities. 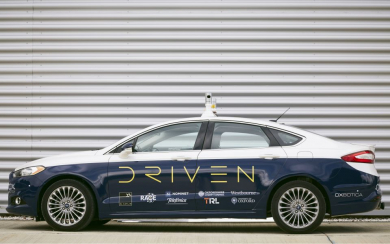